Menu
Previous Next
In Texas, 6 Critically Ill Covid-19 Patients Would Overwhelm This Hospital

In Texas, 6 Critically Ill Covid-19 Patients Would Overwhelm This Hospital

A rural hospital in Texas braces for an outbreak while trying to stave off financial ruin.

With cases in Texas on the rise, a rural hospital braces for an outbreak while trying to stave off financial ruin.

As coronavirus cases surge in Texas and other Sun Belt states, rural hospitals are enduring a uniquely painful emergency of their own, in a world away from the I.C.U.s of New York City, or even Dallas.

With just two ventilators, Rolling Plains Memorial Hospital in Sweetwater, Texas, has been terrified of Covid-19 ever since March. Sweetwater, perhaps best known as the home of the “World’s Largest Rattlesnake Roundup,” has a population of about 10,000. Even the slightest outbreak would overwhelm Rolling Plains, which sits on a major highway that carries tens of thousands of travelers a day.

Rural hospitals in America have been fighting for survival for years, mostly because of their relatively high numbers of uninsured patients. Approximately 130 rural hospitals in America have closed over the past decade, leaving millions of Americans without health care nearby. Texas has had more hospital closures than any other state. And the pandemic, by forcing providers to cancel elective procedures with high insurance reimbursement rates, has pushed many of its remaining hospitals to the brink of bankruptcy.

We spent several months with the staff of Rolling Plains as it fought off Covid-induced financial ruin before treating a single Covid patient. Then, in late April, Gov. Greg Abbott reopened the state, giving the hospital a financial lifeline, but also causing cases to spike statewide. And now, the hospital’s worst fears seemed to be coming true.

By Friday, Sweetwater’s county had 10 confirmed cases of Covid-19, with one requiring intensive care. This video Op-Ed, featuring the staff at Rolling Plains, shows how even just a few coronavirus cases can threaten a hospital, its workers’ families, and an entire rural community.

We are connecting buyers, governments and healthcare institutions from around the world with biotech and medical equipment suppliers.

We are dedicated to providing you with the best experience possible. 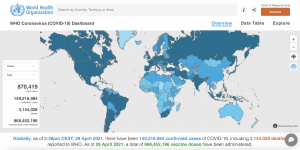